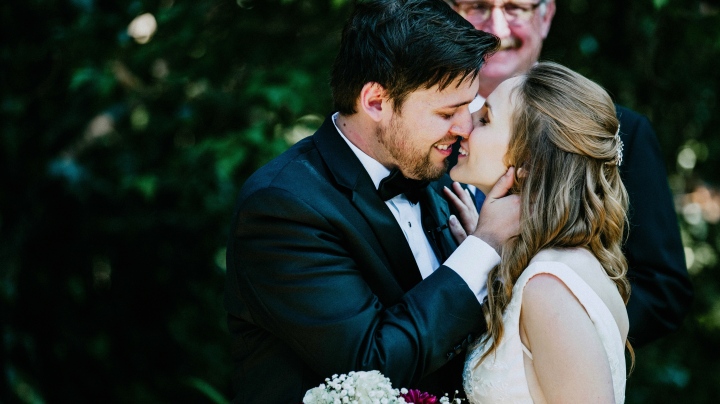 At last, my best friend is my wife. In retrospect, it’s clear that she was always the one. However, it took us years to arrive at forever and always. Our story begins 11 years ago during the summer of 2008 in a Southern California desert, right in the middle of nowhere. We were but teenagers who attended the same youth group meeting. While we were instantly infatuated, it would be almost a decade before we would admit it. We filled the years with phones calls, handwritten letters, and after moving to opposite sides of the country, overnight flights to see one another. Fast forward to April 2017, with a dozen roses in one hand and a guitar in the other, I surprise-serenaded her in the middle of the night surrounded by some of our closest friends in my attempt to ask her to be my girlfriend — she said yes. I promptly proceeded to quit my job, subleased my apartment, and bequeathed my possessions to move back Los Angeles where we would sign a lease. I began to plan the engagement, and the following year on the exact 10 year anniversary of when we met, I asked her to marry me — she said yes. The following year was a wonderful blur of wedding planning. Finally, as she walked down the aisle, I looked back at the long road that lead us to that moment where I would ask her in front of our friends and family to be my wife — she said yes.

Boyfriend and girlfriend, fiancé and fiancée, husband and wife, each of these periods pictured above have been a blessing unlike anything I could have ever imagined, each better than the last. As we embark on the adventure of a lifetime, as Mr. and Mrs. Ramdolfi, I thank the Lord for taking me to the middle of nowhere all those years ago and introducing me to my best friend, my better half, my wife.

Tell me, have you ever experienced a moment in life that seemed ordinary at the time but turned out to be momentous years later?

5 thoughts on “The Ramdolfis”

A Los Angeles native, Mr. Ramdolfi lives north of Hollywood Hills with his best friend and life-long partner, his wife. He likes to spend his leisure enjoying married life, drinking coffee, taking pictures, and writing for you.